Welcome To Rotary Club Of Kathmandu 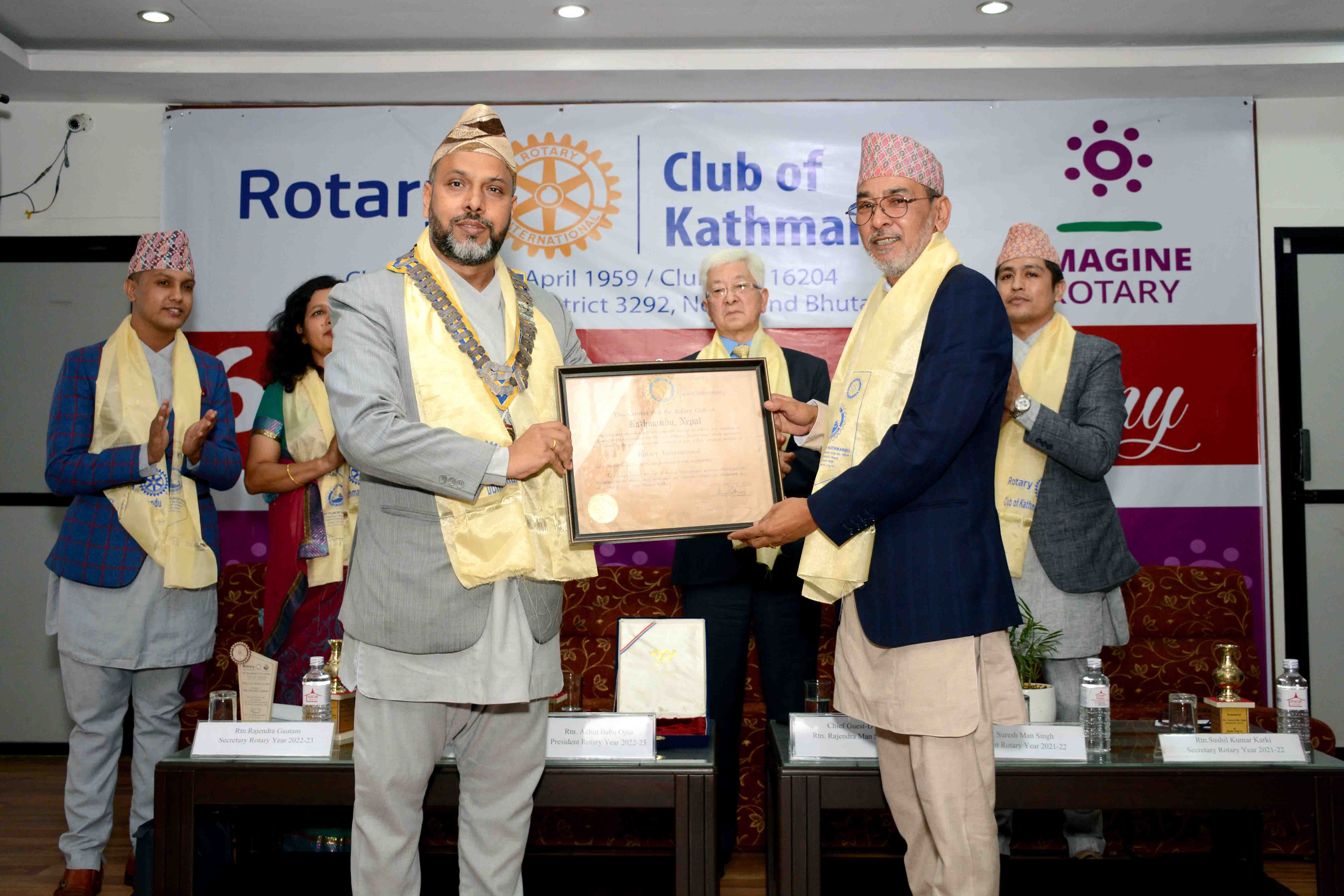 A new page was added in the history of Rotary movement on April 13, 1959 when Nepal officially entered into the global family of Rotarians. This was the day when Rotary Club of Kathmandu was chartered as the first club in Nepal.

Rotary Club of Kathmandu has been making every effort to attain the objectives of Rotary through projects focusing primarily on Health, Hunger and Humanity. Mega Eye Camps, T. B. Control, Leprosy, eradication of Polio, installation of first Radio therapy Unit at Bhaktapur Hospital, installation of first Cath lab in Bir Hospital and then at Sahid Ganga Lal Hospital, establishment of Eastern Hospital at Biratnagar, first Maxillofacial center at National Dental Hospital, medical supplies to the National hospitals and other health institutions, donation of several (8) Ambulances in the different areas, Health camps, various scholarship awards, upgrading and equipping schools, training to the ANM for their self-sustaining, construction of school building and providing physical instrument for its development, Child train and Children’s park at Bhrikutimandap and improvement in Water supply system and construction of several reservoirs, are some of the areas Rotary Club of Kathmandu initiated and supported projects with the kind support of partners in service like Inner Wheel Club, Rotaract Club and Interact Club as well as the RVC and RCCs.

Few connecting historical facts :
The history of Rotary movement in Nepal was started with the first meeting of Rotary Club of Kathmandu on 20th November 1958, as a provisional meeting, at Royal Hotel, Kantipath (Now the Office of Election Commission and Vice President of Nepal). Since venue of the meeting was not permanent therefore, alternatively it was held in Hotel Snow View and elsewhere. Hence the need of its own land and building was felt.
RC Kathmandu was sponsored by RC Darbhanga under the RI District 325 (including Andaman Nicobar Island and Bangaladesh) when Rtn. Shital Prasad Sinha (Classification of medicinal education) was the President of that club and Rtn. Surendra N. Verma (Classification of Mineral Oil Industry, Refine Oil product distributing) was the Governor’s Special Representative (GSR) District Governor of R.I. District 325 was B. H. Engineer Dhanbad. Rtn. Clifford A. Randall from Milwaukee, WI, USA was the Rotary International President, who has signed in the Charter Certificate of RC Kathmandu along with then RI Secretary Rtn. George R. Means, (from Greenwood IN. USA who served as General Secretary of RI since 1953 to 1972) on 13th April 1959; RI Theme was Help Shape the Future. Formal program of Charter presentation ceremony was held on 28th June 1959 as 32nd meeting of RC Kathmandu followed by Lunch in the presence of Club’s Patron in Chief Late King Mahendra BB Shah Dev as the Chief Guest with 25 members among 30. As an Office Secretary of the club, I got the opportunity to meet 4 Charter Members : Late Gopal Rajbhandari, Manindra Raj Shrestha, Gulab S. Harjani and Biswa Nath Jajodia and former Charter members: Siba Prasad Rauniyar, Gopi Ram Ghiraiya, Himalaya SJB Rana, Charter Secretary Jagadish SJB Rana etc.

Main historical fact:
• A legacy of Rotarian has been maintained by Rtn. Ashish Jajodia who is the Grandson of our late Charter member Rtn.Biswa Nath Jajodia
• There were some Ruling Ambassadors as the members i.e. from Japan, Germany, Israel and Egypt